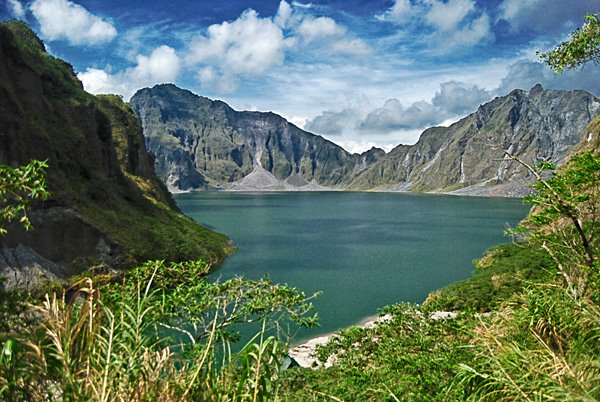 “And now we walk,” Wilson says, jumping from the back of the 4×4 truck where he is seated. Our vehicle is on a wide clearing, parked with other 4x4s. The passengers of the other vehicles are slowly getting down as well. It’s a beautiful morning and the early rays of the sun have arrived. Occasional gusts of wind provide a cold respite from the increasingly strong heat. Nearby, a queue of young men and women in army clothes jog to the ravine, where Wilson says our trek will start. “They’re army students having their graduation today.”

Before us loom tall rocks, protruding from the hardened lahar on our feet, like something you only see in movies. We’re in the base of Mt. Pinatubo, near the Pampanga-Tarlac-Zambales tripoint. It’s 6 a.m. and we’re about to start our trek to the summit, where a pristine crater lake has formed. Wilson is our local guide, and as with what he’s been doing for the past decade with possibly thousands of other trekkers, he’s responsible for leading us through the trek’s most popular route, which begins in Santa Juliana in Capas, Tarlac.

Wilson, in his early 30s, is one of the locals trained by the local government to guide tourists to Mt. Pinatubo. He started as a porter in 2002, simply carrying trekkers’ baggage but was not qualified enough to actually lead them. In 2005 he was among a handful of other locals to have received a permit from the government to be a guide. There were only a handful of guides then that they had to do the climb almost every day. As time went on, and as the popularity of the Pinatubo trek increased – along with the changes in the administration – the number of certified guides also went up. It’s a lucrative job around these parts. Today, the number of bush walkers is staggering – 77 four-wheel drives carrying around 300 trekkers. “I’m reduced to around two climbs per week,” Wilson says.

We commence our trek. The six of us – me, Cheryl, Sheryl, a young couple whose names I forgot, and Wilson – march on to the ravine. We cross a raging, if shallow, stream. The route we’re taking is what’s become of the catastrophe more than two decades following the 1991 Mt. Pinatubo eruption. I was six and in first grade then and my memories of the disaster are mostly from constant news updates on the television. Details in my mind are sporadic but I clearly remember looking outside one morning during class and seeing ash falls from the eruption. The pyroclastic flows from the volcano mixed with rain waters due to a typhoon, producing a lethal mudflow that killed around 1,500 people, displaced thousands more, submerged entire villages and farmlands, and rerouted rivers. “It was horrific,” Wilson, then in sixth grade, recounts. “I saw the lahar flowing and it was scary.” Since then, Mt. Pinatubo has become mostly benign, providing home to several Aeta villages and attracting tourists to its crater on a regular basis.

The ravine opens up to a majestic view that you only thought of seeing in other countries, if not in another planet altogether. It seems to be, as Cheryl sort of says, “too beautiful to be real.” Across the clearing, a group of Aeta women and children are washing their clothes in the stream and drying them on the roof of a makeshift nipa hut. “They live there in one of the villages,” Wilson says, pointing to the top of the valley. I chuckle weakly at what appears to be a joke — the cliff is at a perpendicular angle to the ground and unless they do rappelling, there is no way that those women and children can get to the ground. Except Wilson is serious and he points to a hidden pathway filled with large boulders leading to the top of the cliff. It’s still surprising that these women and children regularly take that path but it’s more plausible to imagine.

Minutes later, the streams turn to yellow. Wilson never even bothers to wait before someone initiates to ask. “Sulfur,” he says. “That only means we’re near the volcano’s summit.”

Before the eruption on June 15, 1991, no one gave Mt. Pinatubo much of a concern. Since it did not erupt for much of recorded history, people living around the volcano took it lightly. Trekkers, too, headed to more popular peaks in the Philippines. At more than 1,700 meters before the eruption, Pinatubo was not the highest peak, and it did not boast of the spectacular views other climbs offered. The eruption destroyed a significant portion of the Pinatubo’s top, reducing the mountain’s elevation by 300 meters and creating a large caldera. Precipitation around the crater eventually created a lake with a diameter of two kilometers and depth of up to 800 meters.

It’s ironic, then, that the destructive quality of the volcano has created the majestic views that are what mostly draw tourists to the summit. Turquoise waters and – on a fine day – blue skies sandwich the lush foliage and gray rocks at the edge of the crater. The lake, though while refreshingly cool, is not exactly conducive to inexperienced swimmers since the soil drastically slopes down and the water gets very deep just a few steps away from the shore. Across the lake, which can be reached via a boat, the soil reaches very high temperatures that smoke can be seen materializing from the ground and bubbles form.

“Time to get down,” Wilson tells our group. People have slowly trickled in and the sun is now in full strength. Getting down is theoretically easier since we’re now working with gravity. But we’re getting tired and the descent actually puts more pressure on the legs. Cheryl loses her footing at one point, slips, and wounds her knee.

We rest while the couple helps her apply Betadine and a band-aid. Cheryl shrugs it off. “No pain, no gain.”

Now that clouds have partially obscured the sun, the lahar formation has taken on a new character – more sinister and otherworldly. It feels like a barren wasteland and despite the trees lining the cliffs, our presence are all that appears to signify life. I squat down to take a picture, and the shot comes out dark. The rest of the group has walked a few kilometers now so I shrug off the underexposed image and carefully run over the rocks to catch up. A few minutes later, celebrity Isabelle Daza and a few foreigners (one of whom I recognize from a TV commercial) jog past us by, heading towards the opposite direction. But we’re too tired to be star struck and have our pictures taken with her. So we move on.

Around two hours later, we’re back at our 4×4. We gulp down what’s left of our water and soon, our vehicle starts the difficult off-road trip to Santa Juliana. “I’ve had it with rocks today,” the other female member of our group says. “The next time I see another rock, I’m going to kick it away.”