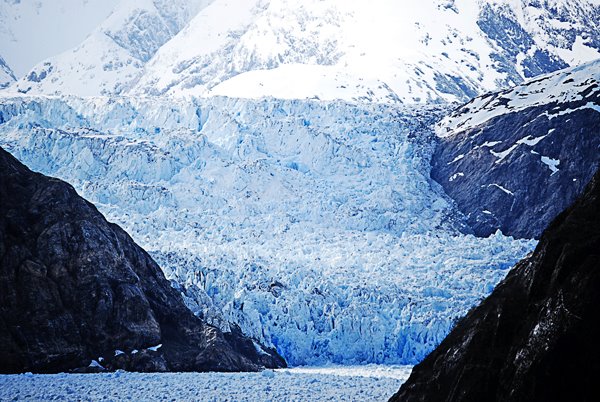 It feels very much like any morning in a hotel. I get out of my bed, wash my face, and prepare to go to the breakfast buffet. As I close our room’s door, an Indonesian housecleaner walks by. “Good morning!” he greets. Stuffing the door card in my pocket, I greet him back. But as I walk in the corridor dressed in two layers of shirt and a jacket, I have a palpable sense of excitement. I’m not in an actual hotel; I’m inside the 11-deck Rhapsody of the Seas, headed to Southeast Alaska for the next seven days along the Inside Passage.

Here’s the plan: we board the ship in Vancouver on Friday afternoon, reach Juneau on Sunday morning, Skagway on Monday, and finally Ketchikan on Wednesday, before disembarking in Seattle the next Friday. It’s the third time in three years our group is doing a cruise, but it’s the first for the most of us in Alaska. We don’t know what to expect – the mere mention of the state alone evokes mystery. Separated from the lower 48 states and without much connecting roads to Canada, America’s Last Frontier is isolated and costly to get to. But we’re assured of its breathtaking beauty and grandeur.

I’m done with breakfast and the captain’s voice crackles through the ship’s loudspeakers. “Folks, we’ve reached Juneau! In a matter of minutes, Rhapsody is going to dock.” I climb to the top deck, clasping my camera. As the automatic door opens, the comforting warmth of the ship quickly gives way to the biting cold. Excited passengers flock by the ship’s railing, gawking at huge snow-capped mountains rising above the seas on both sides.

An hour later we get off the ship and a bus takes us to the bustling downtown port where tour operators are busy dealing with the onslaught of visitors, mostly from cruise ships. The skies are overcast and there’s a slight drizzle, a far cry from Vancouver’s welcoming weather. A wind blows, I shiver. Done with picking a tour and cold beyond comfort, we head inside a souvenir store to wait for our bus. It doesn’t take long before what seems to be a steel-colored, Cold War-era vehicle arrives in a parking lot across the street. We climb onboard with a few more passengers and soon the bus roars to life and heads inland.

“Everyone, welcome to Juneau, the capital of Alaska,” the driver exclaims. “This was the first town founded after the U.S. purchased the state from Russia in 1881.” It’s a just a few minutes’ drive away from the port and suddenly it feels like more and more isolated. I see much less people and even for a late Sunday morning, the roads that twist through impossibly steep hills seem desolate. For a state capital, Juneau feels barren. “It’s pretty much how we live here,” our bus driver says. “In fact, everyone here knows everyone. Not by name, of course. But if you’re around here, I’m pretty sure I’ve seen you at least a couple of times. So the crime rate here is virtually nil. You rob a bank and people are gonna know that you did.”

The narrow streets are soon replaced by wide highways as the bus departs for the Mendenhall Glacier, about 12 miles from the city. Finally, it feels more like the America I know. A sprinkling of familiar establishments dot both sides of the roads. “That is the first McDonald’s restaurant here in Alaska,” the driver tells us. He points to an otherwise plain-looking branch of the fast food store to the left. “When it first opened in the ‘80s, the line was so long, the store ran out of hamburger buns, so they started serving only patties for the rest of the day. And the thing is, people kept on buying. In fact, that line was the longest for a McDonald’s restaurant until they opened one in China in 1990.”

Minutes later the bus stops on a wide space near the foot of the Mendenhall Valley. “Here we are at the Mendenhall Glacier. The glacier was named after the American scientist, Thomas Corwin Mendenhall, although he himself never saw it personally.” The glacier sits at the far side of the lake. The visitors center, operated by the U.S. Forest Service, provides a great view. “You guys have fun here,” our driver says. “I’ll return for you in an hour and a half.” As soon as we all climb out of the bus, he drives off.

Sure enough, after we do the obligatory picture-taking and run around the vast space on the lake’s shore, our bus returns. The driver takes us back to the ship, where warmth and a nice buffet for dinner await.

The next morning we’re in another bus in another town. “I should thank you guys for bringing great weather with you,” the bus driver jokes. “I haven’t seen the sun for about a week now.” We’re now in Skagway, the northernmost town in the Alaskan Panhandle. The ship had docked here a few hours earlier and we’re riding a public bus to take us to the office of the White Pass and Yukon Route. The driver, probably in his early 20s, is referring to the lack of rain that hassled us yesterday in Juneau, but it’s not exactly sunny either. It’s still freezing cold and the lack of sunlight does little help in keeping this virtual ghost town – suddenly Juneau seems like Manhattan – from looking forlorn. “Skagway’s year-round population is around 850 but it doubles in summer, when cruise ships bring in the tourists,” the driver says.

Tourism is the main source of livelihood here. These days, the town exists almost solely for those who want to relive its glory days. From the late 19th century to the early 20th century, Skagway was a beneficiary of the gold rush in the Klondike region and the town quickly prospered. In the late 1890 gold was found in Canada’s Yukon Territory, and prospectors and others who wanted in on these newfound riches soon began crowding the town. The trails leading to the mines 550 miles away, however, were perilous, so a 12-mile road was constructed along the White Pass canyon. But the road was mostly ignored, mainly because it charged toll fees. In response, a railroad was proposed, and in April 1898 the construction of the White Pass and Yukon Route started.

The Klondike gold rush eventually died down and faced with lower global prices for metal, the railways halted its operations in 1982. Six years later it reopened for visitors wishing to relive the town’s halcyon era and traversing the historic railway onboard a narrow gauge railway train across the Canadian border to Fraser, British Columbia. And this is why we’re here. We’re at the Skagway terminus of the railway, waiting for the train. I sit on a bench, trying hard to ignore the cold, munching on a spicy trail mix. A train office employee in a bright red jacket approaches me. “Good morning! Getting ready for the ride?” she asks.

“Yes,” I manage to say, crossing my arms in front of me more tightly as the cold slips into my consciousness. “Is the train coming soon?”

The lady checks her watch. “Well, in about 30 minutes the train will be here.”

I nod my thanks. When the train arrives, it will be warm inside, and it will be a scenic 30-mile ride.

Alaska, I know by now, is full of stories. There are the tales of the frog prince (the Native American version), the raven, the beaver and the bear. There’s the story of how the short summer nights can really wreck your body clock. There’s how the unpredictable tides can confound sea navigators. As I listen to Bob – our tour guide here in Ketchikan – dish out tales and tales and more tales in rapid-fire succession, it seems as if America’s largest state always has a story to reveal. I never get most of what he says, but he seems to relish everything – from scavenging bears to roadside trees even if almost everyone else stares blankly outside the bus.

Ketchikan is actually the first town in Alaska’s Marine Highway but the ship has scheduled it as the third port-of-call for this cruise. By this time some in our group – the more mature ones in particular – are tired, so we have a relatively harder time deciding on what to do for the day. There’s a plane expedition to the Misty Fjords but it’s beyond our budget. In the end we settle for a wildlife-seeing tour, which is how we ended up in this bus with Bob.

“Most tour companies will offer you the moon but fail to deliver,” the guy at the tourist information says. “That’s why I tend to be skeptical about them.” And true enough, the wildlife-seeing tour ends up a bust – all we see are fellow hopeful visitors who have to content themselves with a couple of bald eagles perched on branches too far away. “Well, the salmons haven’t made it to this part so the bears haven’t gone down from the hills,” Bob explains, attempting to justify the futility of this trip all the way from the pier. Plus the incessant downpour isn’t making things any easier.

After the tour a handful of us spend the remaining hours in Ketchikan’s public library, a humble building a few blocks from the port. The others take the opportunity to do their online chores using the free wi-fi. I, on the other hand, pull from the shelf a few coffee table books about Alaska and pore over images taken from other parts of the state just to get inspiration. The final part of the cruise may have been anticlimactic, but I have enough memories of majestic grandeur and adventure from the past few days to be really disappointed. And we haven’t quite reached the end yet.