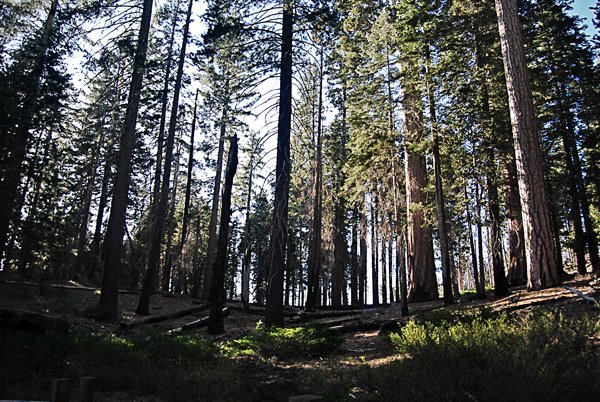 It has been three days since the bus tour. At this time we have based ourselves in Lathrop, where Tita Fenny’s sister (Tita Liz) and brother-in-law (Tito Danny) lives. It has been a fun three days. But all things being transient, we now have to bid farewell to go to L.A., where Lola Vangie has been waiting for us since the end of the Alaska cruise.

Before we head to southern California, we’ll do what most American families do, especially every summer – have a picnic in a park. With us 15 in our rental van and Tito Danny and Tita Liz in their car with Bear – their dog that looks like a tiger – we drive to the Sequoia National Park. This time there’s no guide to tell us where to go and no timeframe to consider. Plus, we arrive at the park shortly before five in the afternoon, and because it’s the weekend, there’s no one at the visitor center. We’re on our own – for better or worse.

Yanyan goes inside a store and asks the woman at the cashier for suggestions on where to go. “Turn left at the first turn you see from here,” the woman says, “and drive straight for a mile. You’ll see the trail to the most beautiful tree in the park.”

Yanyan emerges from the store to relay us the information.

“How do we know it’s the most beautiful tree?” Tito Danny asks. “They all look the same.”

Yanyan shrugs. “I guess there’s a sign that says it’s the most beautiful tree.”

It turns out that the “most beautiful” tree the woman is referring to is the General Grant tree. Standing at around 267 feet, it’s the second largest tree in the world, only after General Sherman, which is also in the park as well. And it’s around 1,650 years old.

The tree is actually located in the General Grant Grove section of Kings Canyon National Park, contiguously north of the Sequoia National Park, though both parks are jointly administered by the National Park Service. The trail around the area contains some other large sequoias, including the Robert E. Lee tree (twelfth largest in the world) and the Fallen Monarch, a large sequoia that has fallen down with its trunk hollowed out for visitors to walk through. The Centennial Stump, which lies near the western end of the trail, was cut in 1875 to be part of an exhibition in Philadelphia. It took nine days to chop down the tree but was turned down by the eastern people, dismissing it as a hoax. Other trees along the trail are the California and Oregon trees. Sequoias were used to be named after the states, but because the names were never properly recorded, most of these names have been lost.

At around 6:30 we return to the parking lot and place our food on two mats spread on the ground. We have a hearty dinner, fully aware that it’s a long drive to L.A. (we estimate we will reach Lola Vangie in Long Beach at around two in the morning). And after the meal and a group picture, we say our goodbyes, climb the van and drive south.