Five hours after a heavy dinner in a restaurant in Makati, I’m in a van that has passed through the North Luzon Expressway, then the Subic-Clark-Tarlac Expressway. The roads have become narrower since we entered the Ilocos Region, where I’ve been a couple of times in the past year. A few hours more and the familiar sign pops up, saying we have arrived in the Surfing Capital of the North. I have finally returned to San Juan, La Union.

I made a trip here last year, supposedly to do a surf-themed photo shoot that didn’t push through. It was really a spur-of-the-moment thing and the lack of preparations forced me to just stay a few hours, watch people surf, and eat lunch before catching the afternoon bus to Manila.

Then came this. I’ve always wanted to celebrate my birthday traveling, and the original plan for this year was to go to Mindoro, beach-bum in Puerto Galera, and visit a Mangyan village. But a few weeks ago, there was an invitation to join CJ and Roxy, with whom I went to Laos last year, on a weekend trip in La Union with some of their colleagues.

Ever since that La Union trip cut short last year, I had always been intrigued by the place and the surf culture. I love the ocean, and there’s the curious blend of a surfer’s laid-back attitude and the risk-taking disposition toward the waves. So I figured this might be the best time to finally get to know San Juan much better and postpone that Mindoro trip for a future long weekend. 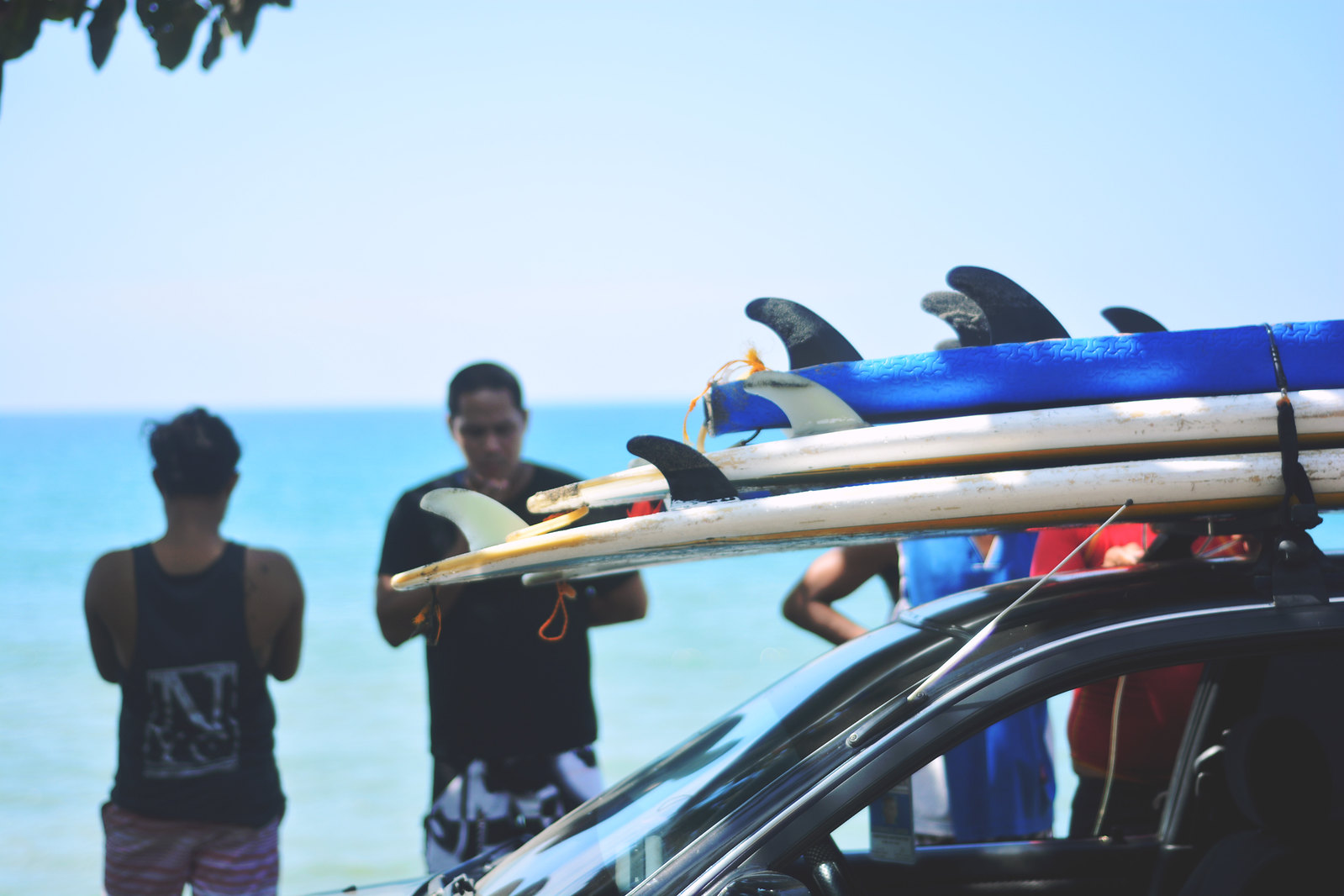 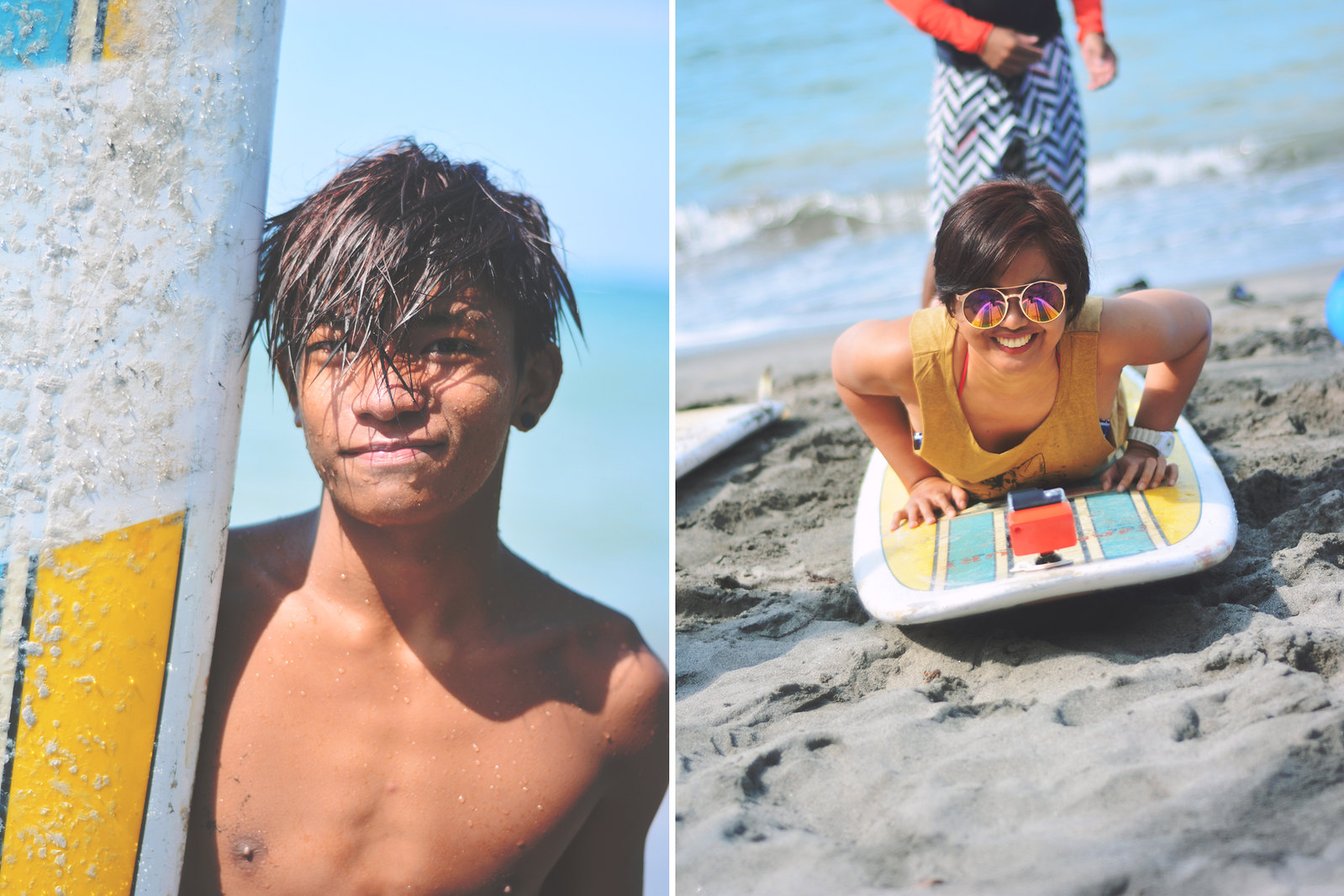 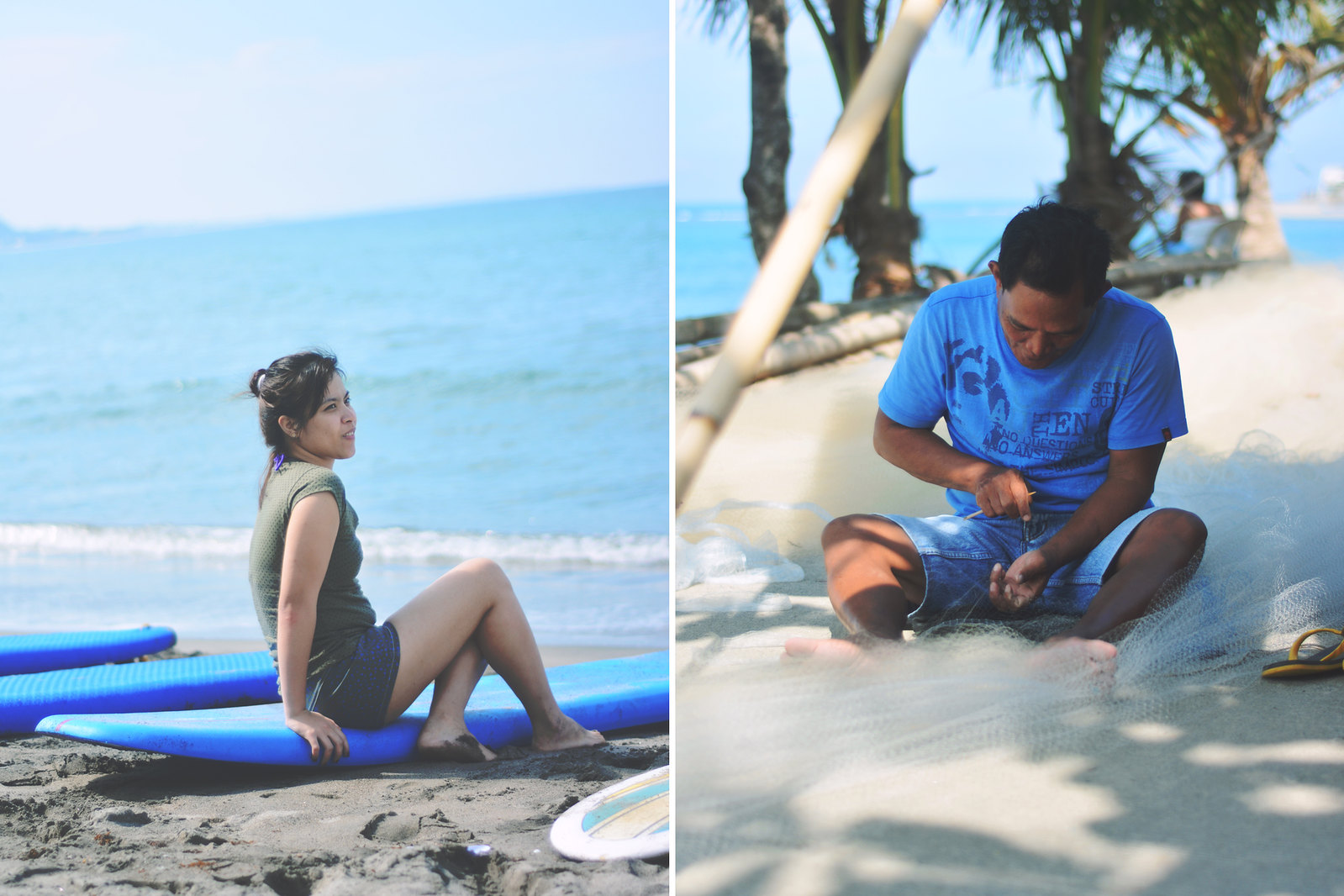 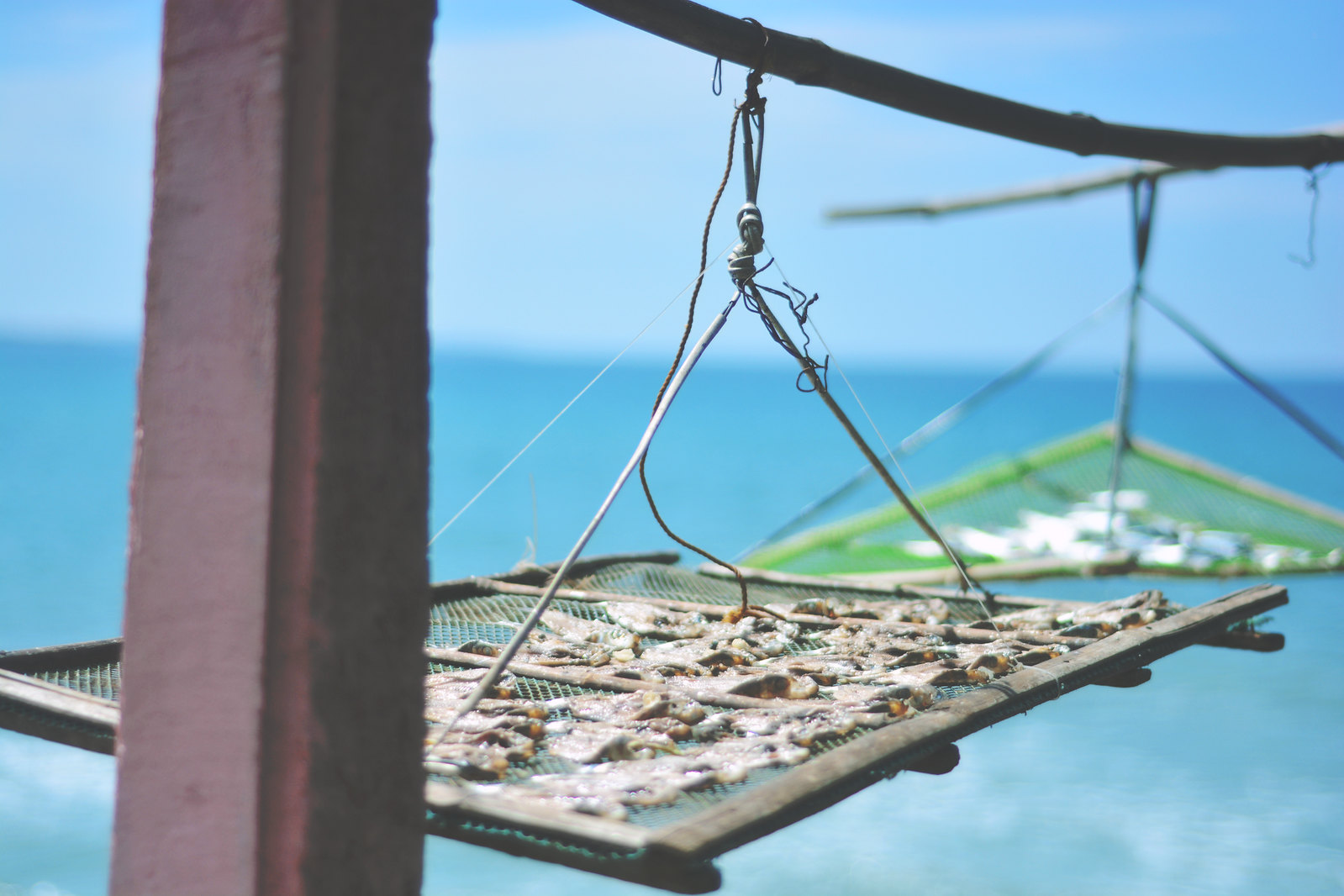 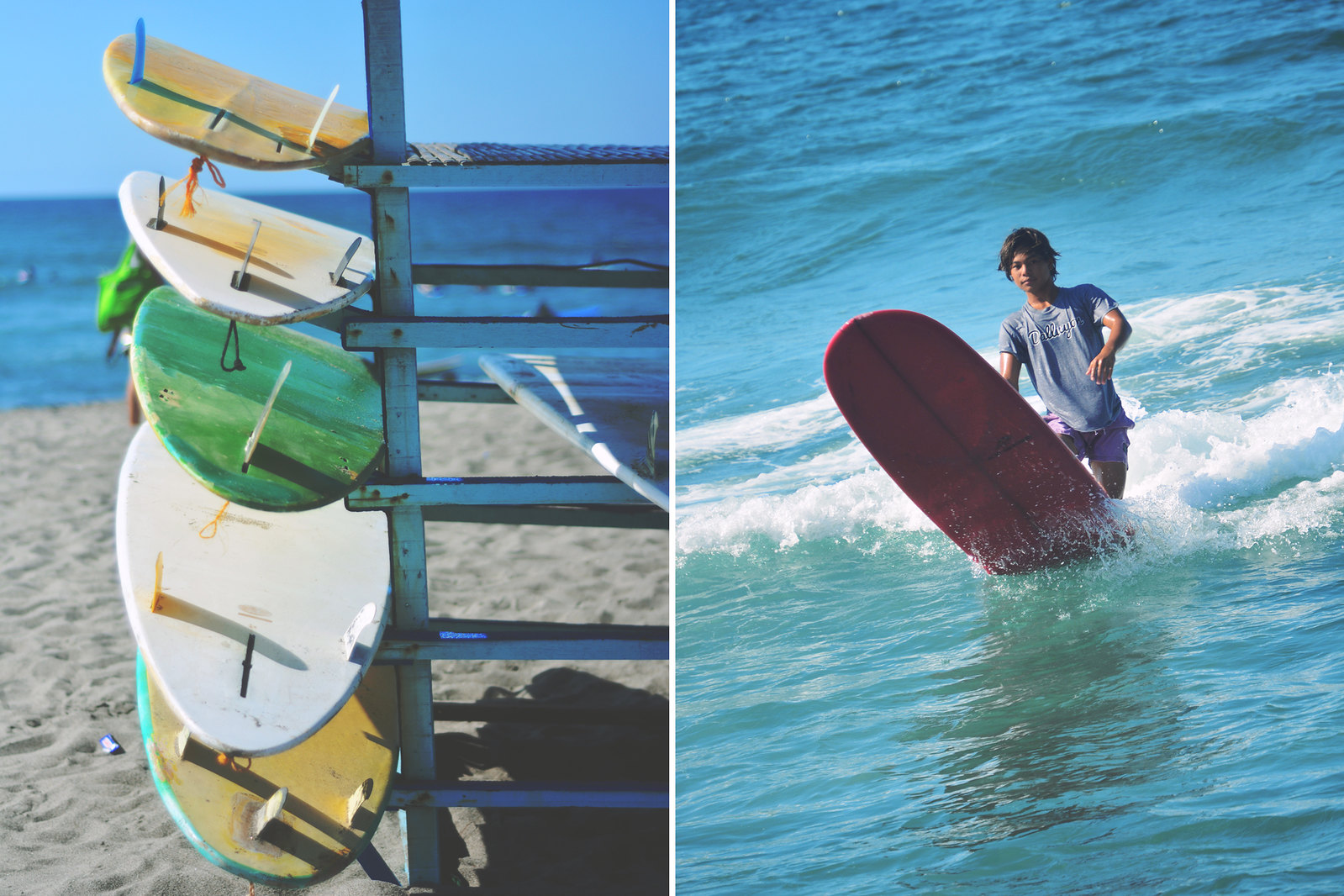 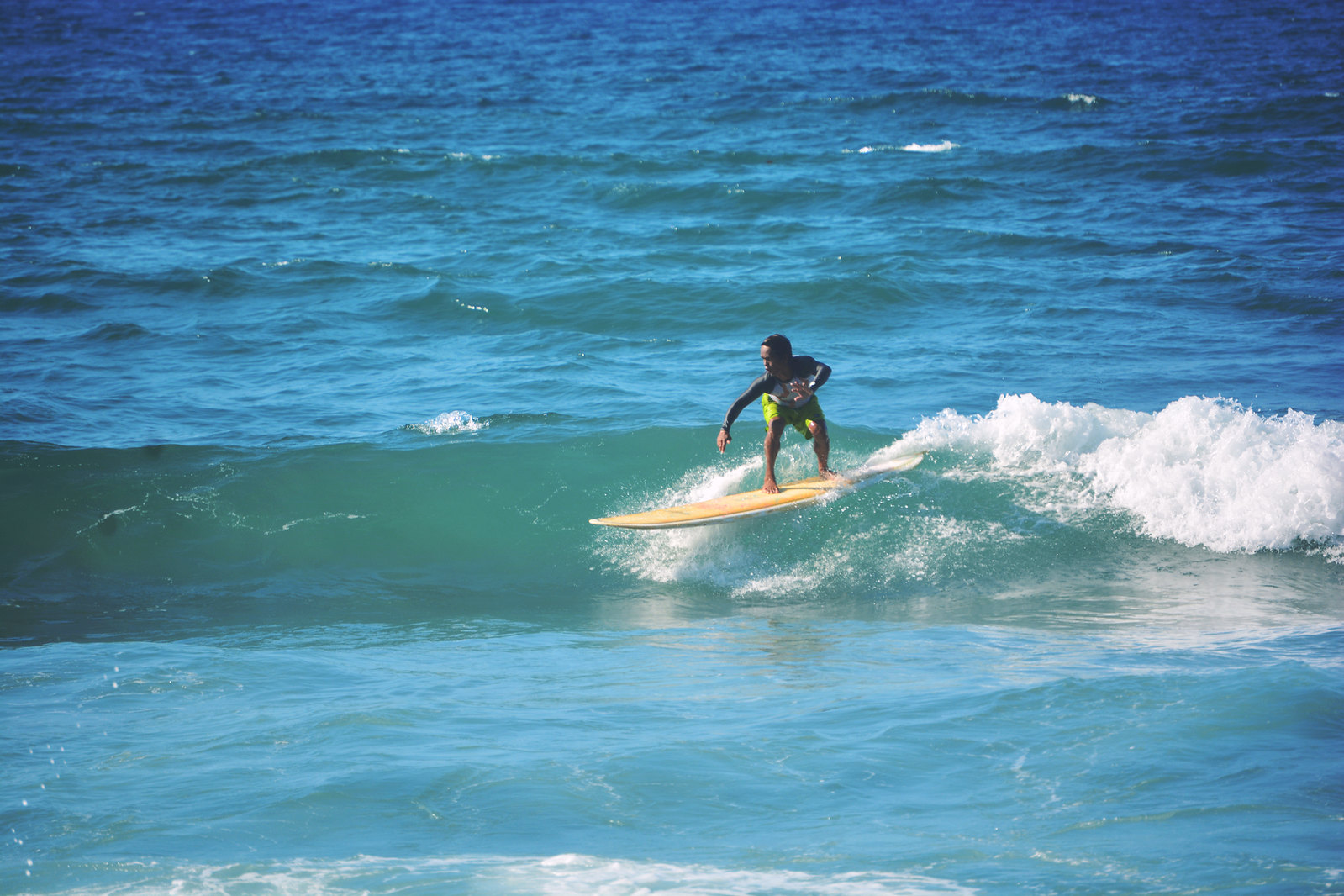 By the time we have dropped our bags in our hotel rooms and finished breakfast in a beach-side restaurant, San Juan is already basking in early morning sunshine. We head to a beach a few kilometers north for our surf lesson. The place isn’t particularly special, but the waves are perfect for beginners. Our group is divided into two – those who are surfing for the first time, and those with prior experience. I join the former.

It’s actually my second surfing lesson, three years after the one in Baler, but I’m not that confident yet with a surfboard. My instructor is Daniel, a 16-year old who has taken up surfing just last year, but swivels his surfboard through the waves like it’s been his lifelong passion. I position myself on my board on the sand while Daniel goes over the principles of surfing, how to properly raise yourself and ride a wave. Finally, we’re ready to hit the water. 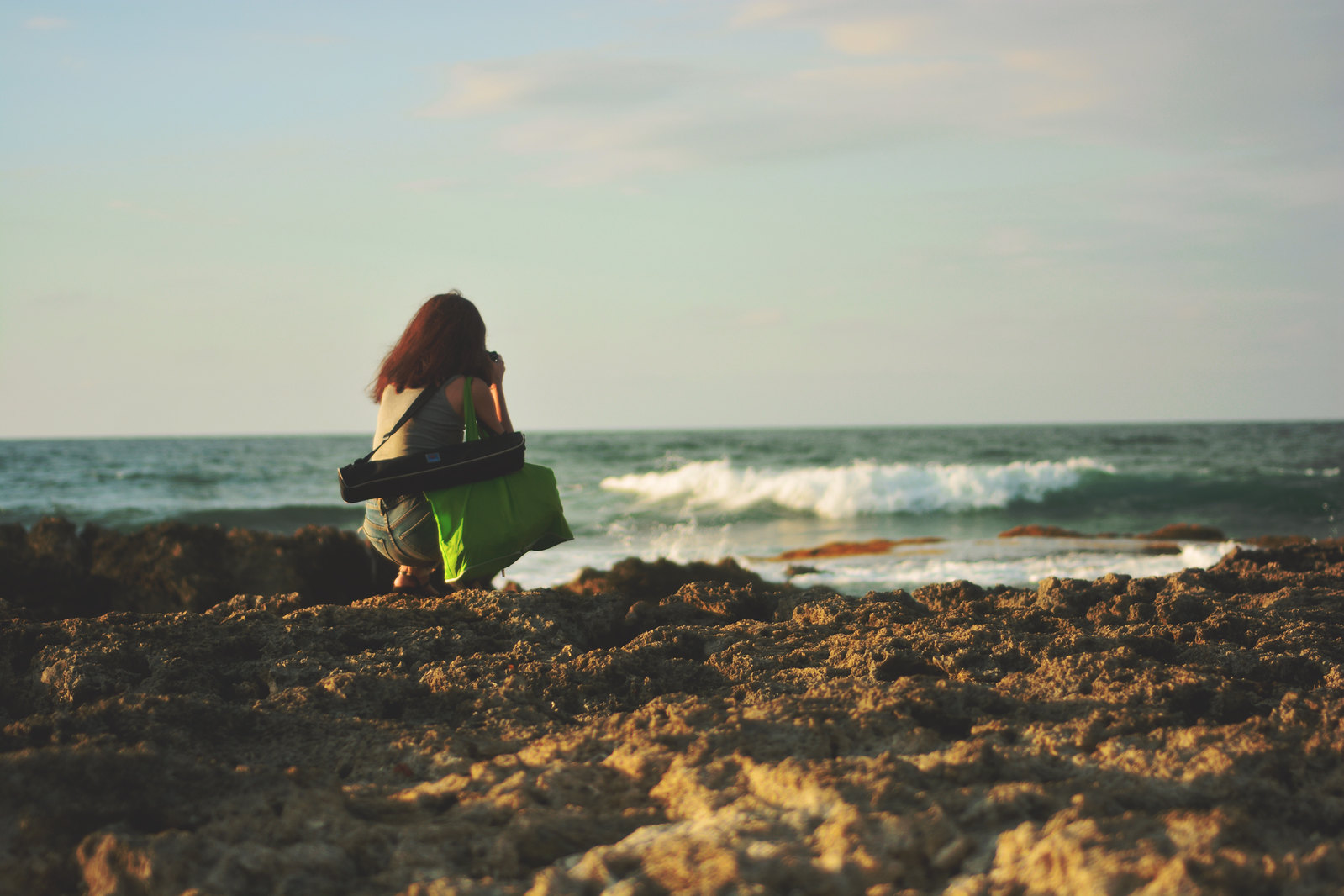 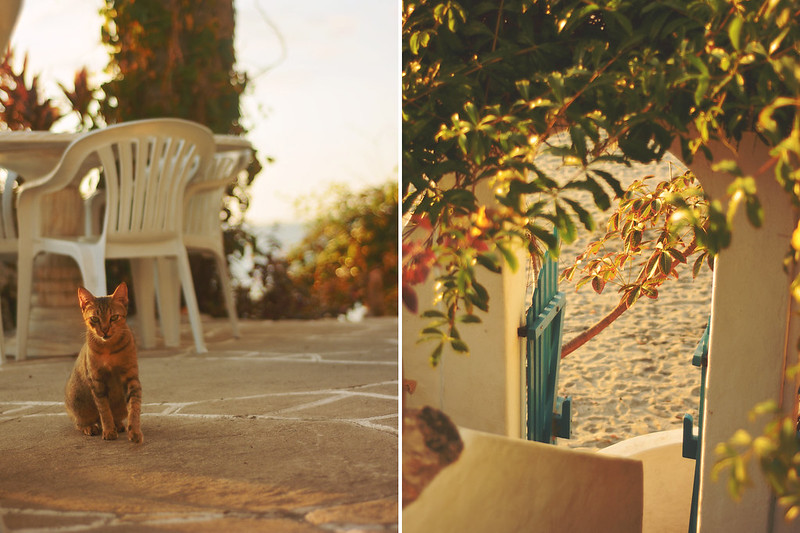 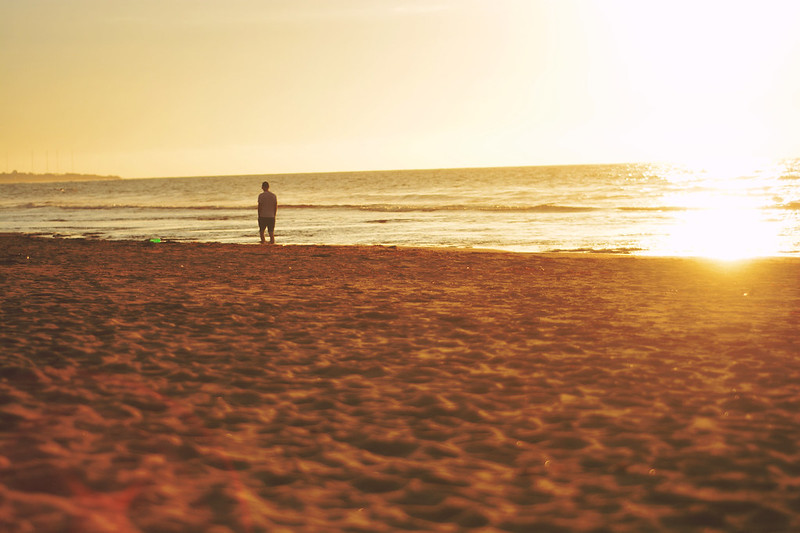 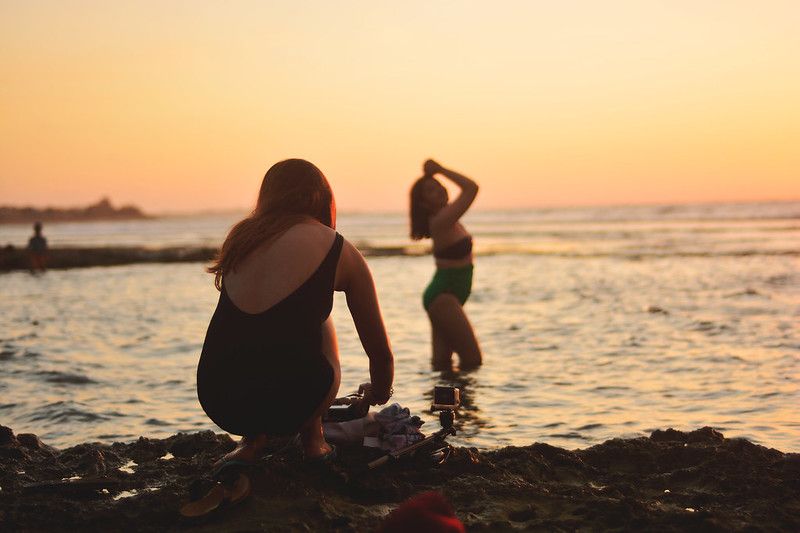 I stroll along the beach in the afternoon, taking pictures of the place, while Roxy and the rest of the group resume surfing. Walking along the beach, surrounded by surfers and their boards, and hand-painted signs for surf lessons reminds me of the last time I was here. All these were something I’d seen when I first arrived here, but now that I look again, I realize that La Union is really steeped in a culture that was born elsewhere but has been embraced by the locals as their own.

Following the sandy strip away from the crowds, I find myself in La Roca Villa, a resort with a Mediterranean theme. Walking inside with the golden hour sunlight passing through the vines draped on its white walls, I feel like I’m somewhere either in Tuscany or a Greek island. I explore the place for a few minutes, then descend a winding staircase with a cobalt-blue gate leading back to the beach. In the distance, I see CJ, who has positioned herself on a rocky outcrop, waiting for the sunset. 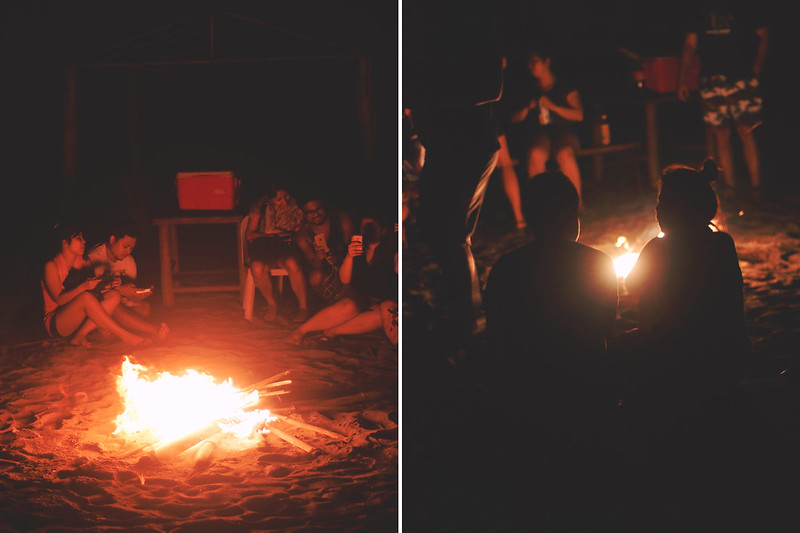 In the evening, after dinner at a nearby diner, we head to Flotsam and Jetsam Hostel a few minutes walk from our hotel. The place is teeming with guests settled in cushy seats or on mats on the sand. A steady drone of conversations are drowned by the bass-filled techno music pumping out of the speakers. There’s an unmistakable hipster vibe around.

We set a bonfire at the beach a few meters from the hostel, and just generally having a good time under the stars. 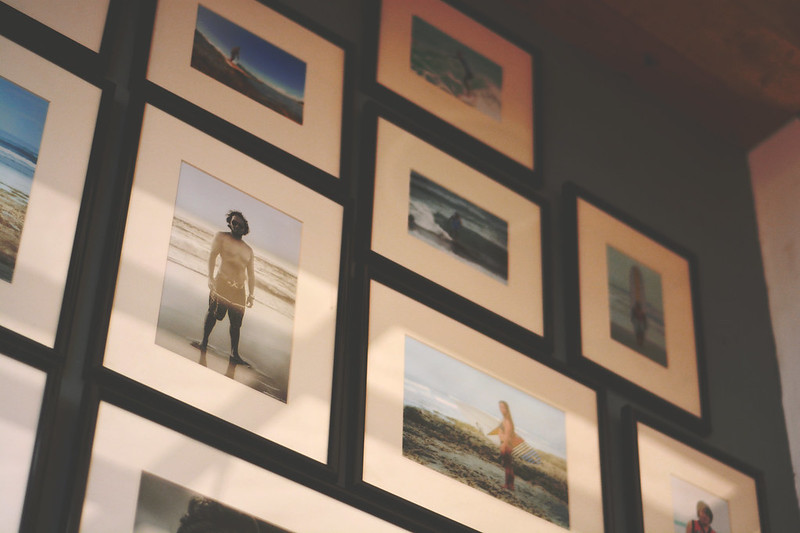 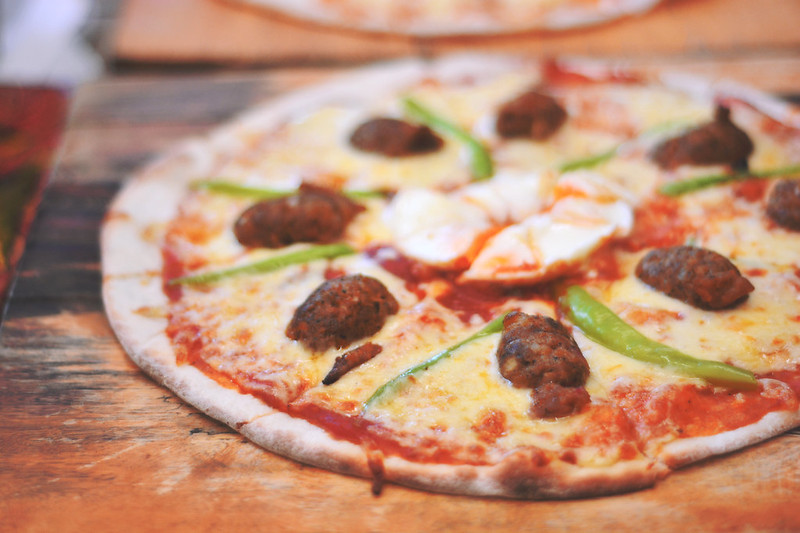 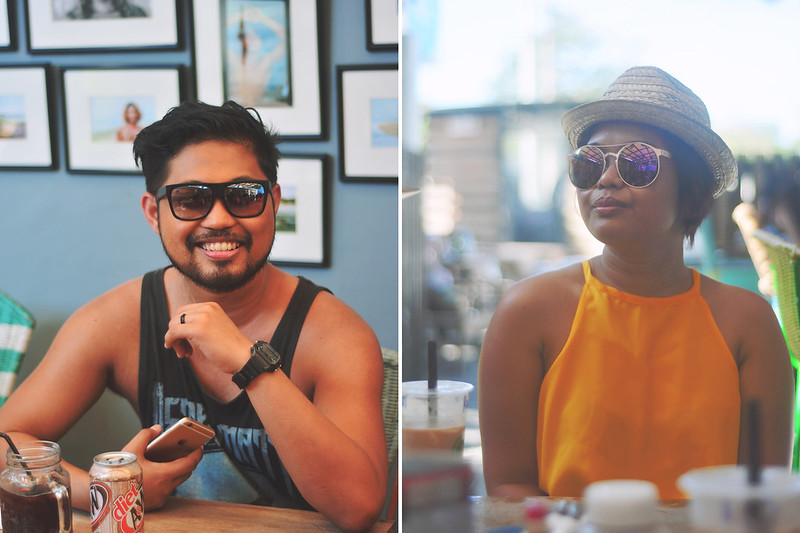 The next day, my birthday, six of us sign up for another surf session, but the place is booked with visitors and there are no available instructors, so I just join the rest enjoying the large waves and the ocean as the morning goes on until it’s time for us to pack our bags.

Just before leaving, some of us head to Surf Shack just across the road for lunch. As the name implies, the restaurant embraces the surf culture with surfboards hanging on the wooden walls, and framed pictures of surfers on another. There’s a bit of a high-end vibe here, but the staff are nonetheless very approachable. I order Bacnotan Pizza, named after a neighboring town and containing Ilocano longganisa, long green peppers and egg. It takes a while for my order to arrive, but you can tell that when it does that it’s made fresh.

Overall, it’s a fun weekend. It’s a good breather to be away from the city and to be beside the sea, where I am always at ease. Thirty-one will definitely be filled with new experiences, and I’m praying to God and keeping my fingers crossed that it will inspire me to travel better and love more.