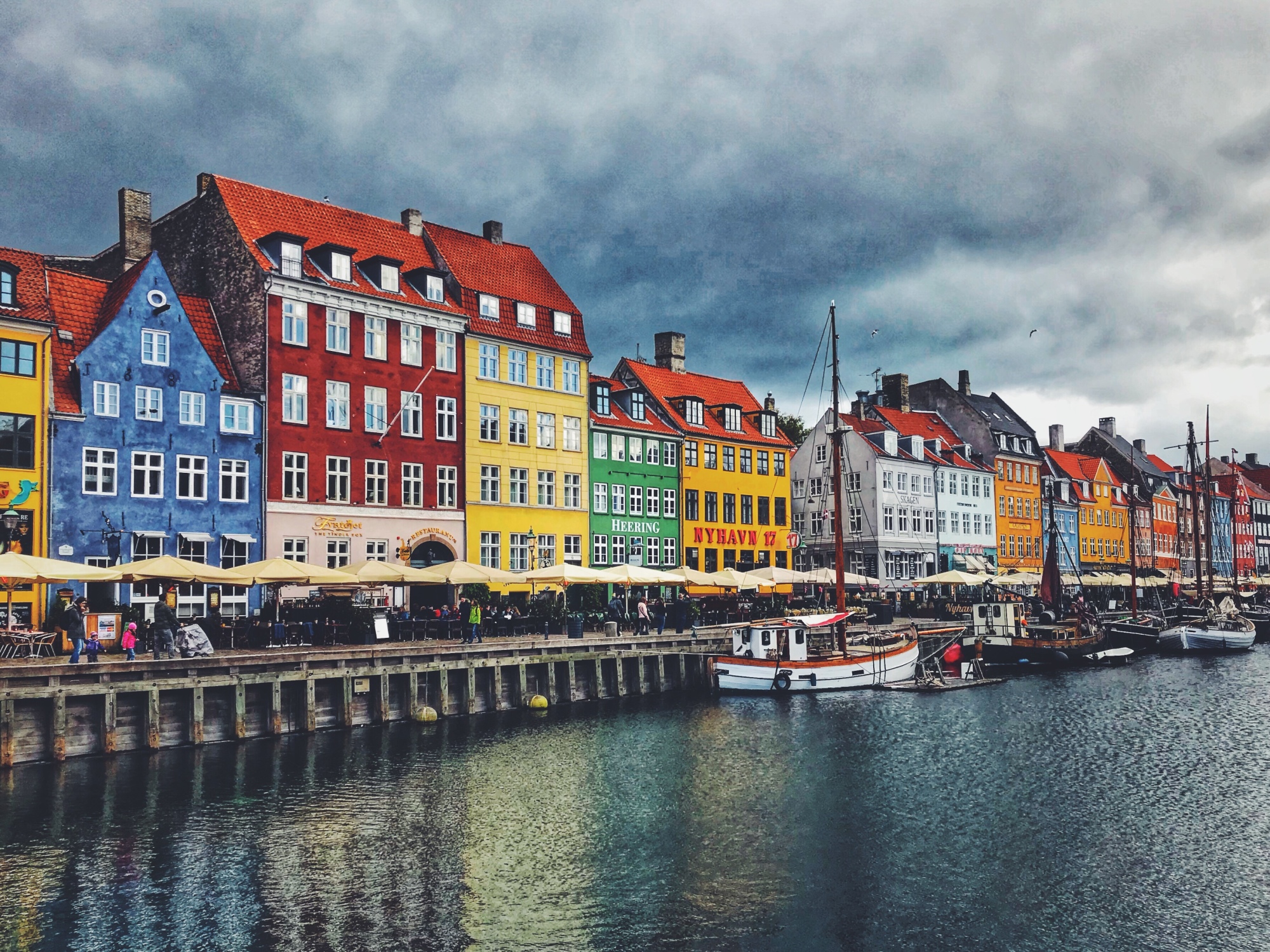 A STEADY DRIZZLE STARTS TO FALL ON COPENHAGEN on a gloomy Wednesday morning. I’m walking along the Stroget district’s cobblestone paths with a group of other tourists. “There’s one thing predictable about the weather here, and that’s it’s unpredictable,” says Alan. Our Danish guide is leading a small group of us through the narrow alleys of the city’s famed shopping district, dishing out tidbits of information and anecdotes on the city’s history. There’s hardly a hint of frustration in our faces despite the potential for colds later on. We’re too engrossed in learning about Copenhagen.

Yanyan and I arrived in Denmark the previous afternoon after a five-hour bus ride from Gothenburg, and after a short stroll around the area around the city hall and a (relatively) good night’s sleep in our cramped and creepy hostel, I join one of those free walking tours. My sister, meanwhile, stays behind to rest further.

So here I am, along with a handful of other tourists, listening to Alan as he tells us how the Danish capital came into existence. The place is teeming with history and architecture — from Gothic to Neoclassic — you can simply loiter around and still land on an interesting place. And the drizzle doesn’t last long; by the middle of the tour, the sun has appeared again to cast a warm morning glow on the city.

UNTIL THE 12TH CENTURY, Copenhagen was just a small fishing village. In 1167, Bishop Absalon took control of the settlement and erected a castle on present-day Christiansborg. The town then flourished as a transit point between the Viking hub of Roskilde and Lund in Sweden, and due to its strategic location by the Øresund Strait and trade with other European cities, it gradually rose in importance. Still, it wasn’t a steady rise. Repeated attempts of invasion by members of the Hanseatic League resulted in laying waste of the city.

This prompted Danish monarchs in the 16th century to build massive fortifications around Copenhagen. King Christian IV especially embarked on a building spree, erecting the ramparts still visible throughout much of the city. His other projects include the Rosenborg Castle, Rundetårn and the districts of Nyboder and Christianshavn, all landmarks of modern Copenhagen.

Still, it wasn’t all peachy. The city was struck by a plague in the 18th century, decimating about a third of its population. Two fires – one in 1728 and another in 1795 – also broke out, destroying much of the infrastructure. Rebuilding efforts took place, and the city grew outside its fortresses.

The Germans would then occupy Copenhagen during World War II, although the city would be spared from the massive destruction that befell its southern neighbors. Following the war, city authorities introduced the “Finger Plan,” an urban development project that sought to combine housing and commercial building projects with large green areas along five “fingers” stretching out from the city center.

AS ALAN TAKES US THROUGH THE OLD TOWN TO THE NYHAVN DISTRICT, a hip and energetic vibe permeates through the cobbled streets. Today Copenhagen is one of Europe’s trendiest and most accessible capitals. The locals are friendly and welcoming, and the city center is compact and largely given over to pedestrians and cyclists. Numerous sights and museums can fill itineraries for a few days, while restaurants and cafes are doorways to the legendary New Nordic cuisine.

Copenhagen can also be a great introduction to that Danish of all Danish qualities – the hygge. Roughly translated as “coziness,” hygge (pronounced “hoo-gah”) encompasses a feeling of comfort by enjoying the simple things in life with the company of family or friends. It goes deeper than that, though, as enjoying a hot cup of coffee on a drizzly morning in a coffee shop even by yourself can be hygge. Meik Wiking, the CEO of the Happiness Research Institute in Copenhagen, describes it as “a defining feature” of the Danes’ cultural identity and “an integral part of the national DNA,” going as far as to compare it to “what freedom is to Americans.”

It’s perhaps because of this hygge that Denmark ranks consistently as one of the happiest countries in the world, if those surveys are to be believed. Alan himself is skeptical of the validity of those since “happiness can be really subjective,” he says. A person in a tropical island country, for example, might be poor but might have a sunnier disposition than a Scandinavian who might be having the blues on a chilly winter evening.

What those surveys might be actually measuring is the contentment of an individual, whether he/she feels really happy or not. And the egalitarian model of the country’s economy have much to do with it. In Denmark, as in the rest of the Nordic countries, no one is too rich nor too poor; everyone has just enough to live a very good life.

YANYAN AND I SPEND THE REST OF THE DAY just taking it easy exploring the rest of the city center. We first start by going to Nyhavn. This was covered by the walking tour, but Yanyan didn’t join, and I want to return anyway to get a better look at the townhouses and experience the place a bit more. The district is popular for the colorful 18th century townhouses that line a canal. The houses are now cafes and bars, which are popular hangouts year-round. The canal is also the starting point for numerous boat tours around the city.

North of Nyhavn is the royal district of Frederiksstaden, where the four Amalienborg palaces are located.  Two of the palaces serve as home to the royal family. The octagonal courtyard in the center is open to the public, and visitors can see the changing of the guards every noon. We push on further north until we reach the Little Mermaid statue, a landmark that pulls in as many selfies as sighs of disappointment over how un-grand it is.

In the afternoon, Yanyan embarks on a window shopping tour of the Stroget while I explore the area around Rosenborg Castle, once the principal residence of Christian IV. The castle grounds is already worth a stroll, though it’s worth venturing inside to see 400 years’ worth of royal splendor, including the Crown Jewels and Royal Regalia.

I meet with my sister in the evening at the food hall beside Tivoli, the world’s second-oldest amusement park. It’s closed tonight, though, and won’t be open until late in the autumn, so we content being just outside it, munching on grubs from one of the food stalls. Yanyan orders a burger, and I have smørrebrød, the most famous contribution of the Danish to global cuisine.

As the night deepens, Yanyan and I walk in the streets once more. Most stores have closed by now, but the city is still lit up by restaurants, bars, and billboards. We’re not keen on getting back to the hostel especially since it’s – well – underwhelming compared to the accommodations we stayed in in the other parts of this trip. Besides, Copenhagen is the type of city that has something for everyone at any time of the day.

“What do you want to do?” Yanyan asks me.

“You want a hotdog from the stand near the train station?” I suggest. She nods.

One thought on “Copenhagen: Rise to Happiness”