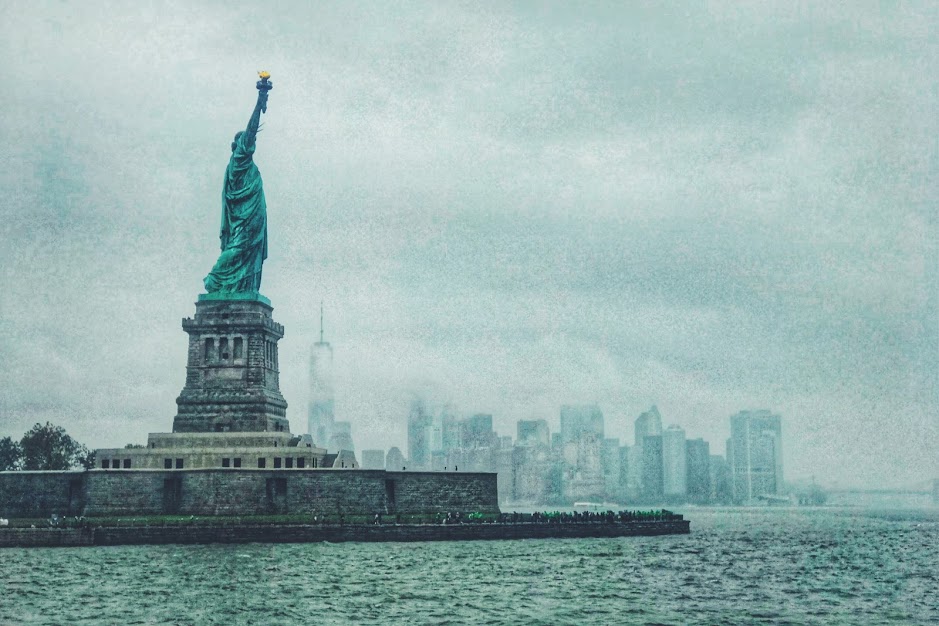 IT WASN’T EXACTLY LOVE AT FIRST SIGHT FOR US with New York City. The first time I was here in 2010, it was for just a couple of days on our way to Europe. I never got to really explore the city, with rains limiting our itinerary to a couple of sights in Midtown Manhattan. Now, with five days to spare, Yanyan and I plan to experience NYC a bit deeper and see the sights we missed the first time around.

New York City’s adrenaline-charged pace is overwhelming especially after spending some weeks in the barren spaces of Iceland and Scandinavia, where the cities look like small towns in comparison. And it doesn’t help that on our first two nights, our hotel is a ramshackle building in the center of Chinatown (the cheapest we could find) and our room is about the size of a luggage storeroom without any windows. A cockroach crawls out the door as soon as the we open the door and the light.

Still, there’s no denying that this is the cultural and financial capital of the United States, if not the world. With numerous icons gracing movie screens and filling the imaginations of people around the world, New York City holds enormous appeal for visitors. Its long history manifests in the lanes of Wall Street and apartments of the Lower East Side, which share the same space with modern skyscrapers. Street life is always alive round the clock, with notable differences as you head from one neighborhood to the next; it’s like the world cramped in just under 800 square kilometers of space. Places like the Central Park provide New Yorkers more than ample opportunity to interact with nature. For raw energy and cultural diversity, New York City is at the forefront. It’s the center of the world. At least that’s what the locals think, though it’s really hard to argue with them.

NEW YORK CITY CONSISTS OF FIVE BOROUGHS, but it’s the central borough of Manhattan that most people associate the city with. And just like with almost all tourists, it’s here where Yanyan and I spend most of our time. In the morning, eager to get out of the hotel, we head to Lower Manhattan. Starting in this area only seems apt, since it’s here where the city traces its origins. Buildings like the Trinity Church, the Federal Hall, and Wall Street remind visitors of how old the city really is despite the modern gleaming skyscrapers that underscore the district’s role as the city’s financial center.

The plan is to explore the neighborhood thoroughly, but the streets are proving a more difficult challenge than we expected them to be. We get lost in the subway and in Brooklyn and end up spending half a day just crossing the Brooklyn Bridge and wandering the streets to a nearby Starbucks to use the wifi and the toilet. We lunch at a Snack Shack restaurant before spending the rest of the afternoon watching a movie.

We also have a rough awakening of how different it is here compared to peaceful and friendly Scandinavia. While crossing the Brooklyn Bridge, a cyclist runs into a woman, sending them both crashing to the ground. The cyclist screams and curses the woman repeatedly before biking away. The woman breaks into tears. Yanyan and a couple other people rush to comfort her.

The next day, we check out of the hotel, leave our bags at the lobby, and, armed with more knowledge of the subway and the area in general, we manage to tick off most of Lower Manhattan’s sights, including the Wall Street, the Statue of Liberty, and the 9/11 Memorial. Heading north, we stop by the Flatiron District, resting a bit in Washington Park before trudging our way to Midtown Manhattan. Here is where most of the city’s iconic structures can be found – the Grand Central Terminal, the Empire State building, the Chrysler building, and the neon-filled streets of Times Square.

In the evening, Yanyan and I ride an Uber to the northwest corner of Central Park where my high school classmate Lora, her husband Melvin, and their son Kalel live. Lora has been living in New York City for more than a decade now and has become familiar with the city’s quirks and nuances, and she invites us to stay in her home so that we don’t have to endure the sorry state of our hotel. While we’re unpacking some our things and trying to settle in the warmth of her unit, Yanyan makes her way to the kitchen to cook sinigang, a Filipino dish consisting of pork, vegetables, and tamarind broth. A few minutes later, we have dinner and catch up on things.

IT’S NOT UNTIL THE NEXT MORNING WHEN I SEE how beautiful New York City is viewed from the window of a 14th-floor unit. Lora’s apartment overlooks a scenic view of the park where the trees flow to the horizon and meets the skyscrapers of Midtown and Lower Manhattan. With clear skies and the warm rays of the sun finally showing up after days of gloomy weather, it’s a completely different image of the city – amiable and cozy. And it’s gradually dawning on me that beyond the initial hassles we have experienced, New York City is a place you wish you live in.

It’s not hard to understand why Lora has chosen this as her new home despite the struggles that come with living in one of the world’s most expensive cities. As an artist, she can be herself here, and there are lots of opportunities for both individual and career growth.

Lora takes us to the Upper East Side, which according to her, is her favorite neighborhood in Manhattan. She brings us to the tramway that transports passengers to and from the Roosevelt Island. “This is where I first usually bring friends when they visit New York City,” she tells us as the tram glides above the city’s skyscrapers. There’s not much to do on Roosevelt Island itself except enjoy the lack of crowds present in the other side of East River.

We’re back in the Upper East Side shortly before lunch, and Lora takes us to a restaurant that’s a favorite among Filipino tourists. The Serendipity 3 restaurant in 60th street has been used as scenes of several films, including the 2001 rom-com starred by John Cusack and Kate Beckinsale.

In the afternoon, Lora has to leave for work. Yanyan and I go to the Chelsea District in the other side of Manhattan. Here, we browse the Chelsea Market, where the hipster vibe is very much palpable. We then climb the High Line, a 1.45-mile-long disused elevated railroad that has been transformed into a linear park. We just walk a bit before returning to the subway and back to Lora’s apartment.

THE NEXT DAY, Yanyan decides to spend time with a family friend in upstate New York while I remain in the city. Lora and her family have to go someplace, which leaves me on a solo tour. I return to explore the High Line in the morning and the rest of the Chelsea District. The dark skies have returned again and a steady drizzle forces me to spend the rest of the morning inside the majestic – albeit crowded – halls of the New York Public Library.

When the rain lets up in the afternoon, I ride the subway to the Upper East Side once again to view the Guggenheim Museum and the Metropolitan Museum of Art. The ticket prices for both are above my daily budget, so I content myself viewing both buildings’ architecture.

Lora and her family has to go to New Jersey the next day to visit some relatives, so I’m on my own again. It’s my last morning here, and I choose to go out of Manhattan and stroll the streets of Brooklyn. I spend much of the morning in DUMBO (short for Down Under Manhattan Bridge Overpass). I then return to Manhattan to explore the galleries and quirky shops of SoHo. I also have lunch at a pizza stand here.

In the afternoon I return to Times Square and watch people go about. People of all ethnicity congregate, joined by a common goal to see the concrete jungle. There are other sights I want to see, but my legs are already aching, and I want to just soak the frenetic atmosphere. I listen on my phone to Jay-Z and Alicia Keys sing about the big city.These streets will make you feel brand new, big lights will inspire you…