From Tangier, I ride a bus to Chefchaouen, spending about two hours on the road with a short stop at Tetouan (a place I would have wanted to stop in if I wasn’t pressed for time). The journey provides a great view of the Rif Mountains in the distance, a departure from the coastal views in my two previous stops. The Rif is an integral part of Moroccan culture, especially among the Berbers, who have lived in the mountains since prehistoric times.

The region is also known for its cannabis, which has drawn weed-smoking travelers in the past (cannabis consumption, buying, and selling are illegal in Morocco, though). Those days are long gone, as most of the tourists to this region flock to Chefchaouen, not to relax with marijuana but with the vibrant blue-painted streets in its medina. In fact, the staff at the riad I am staying in tells me, “The best thing to do here in Chefchaouen is to get lost in the alleys.” Chefchaouen is a small town, though, so there’s no worry of getting lost lost. A few turns here and there will lead you to a familiar landmark, and before you know it, you’re back in the main square near the medina’s front entrance. 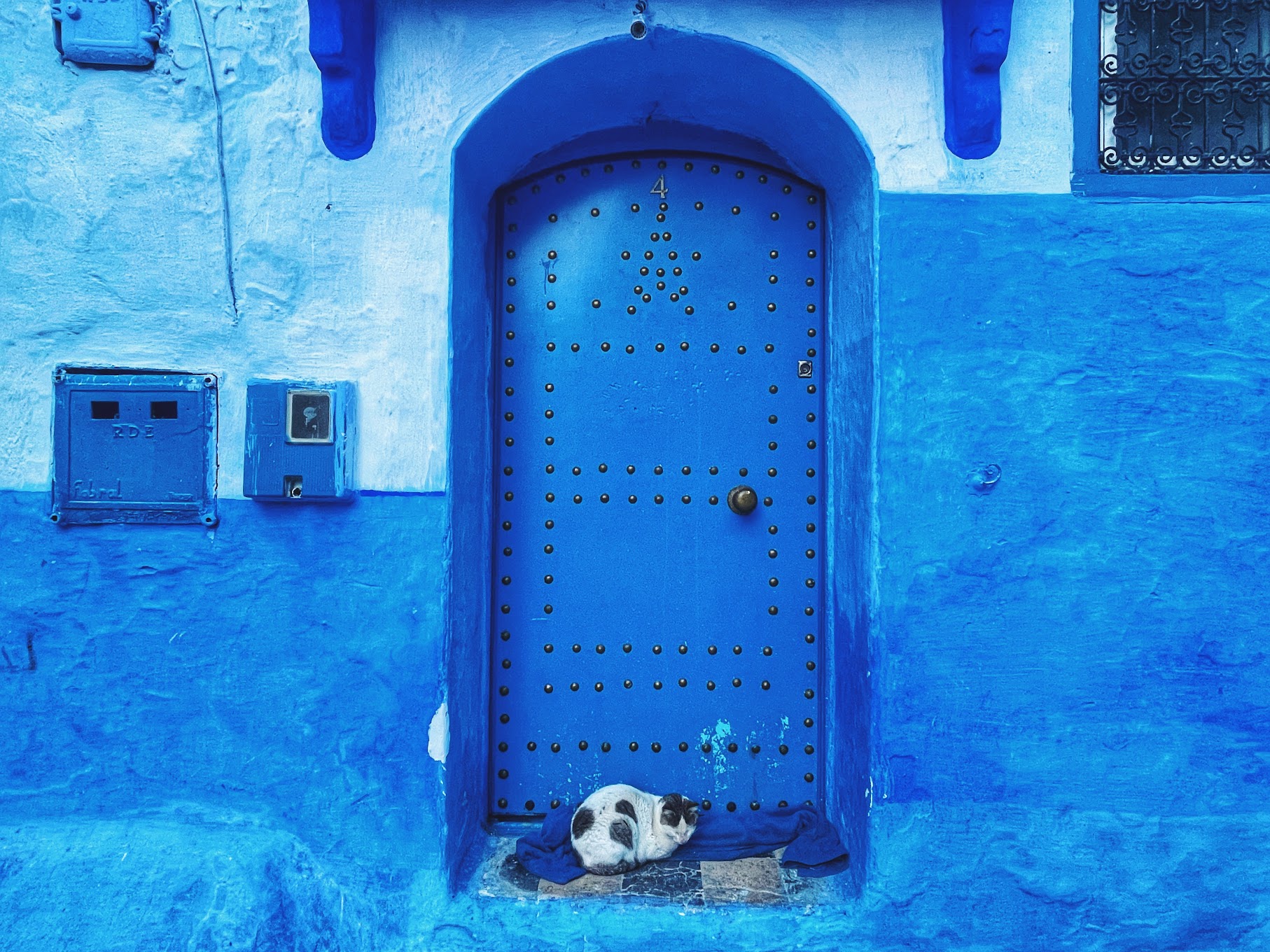 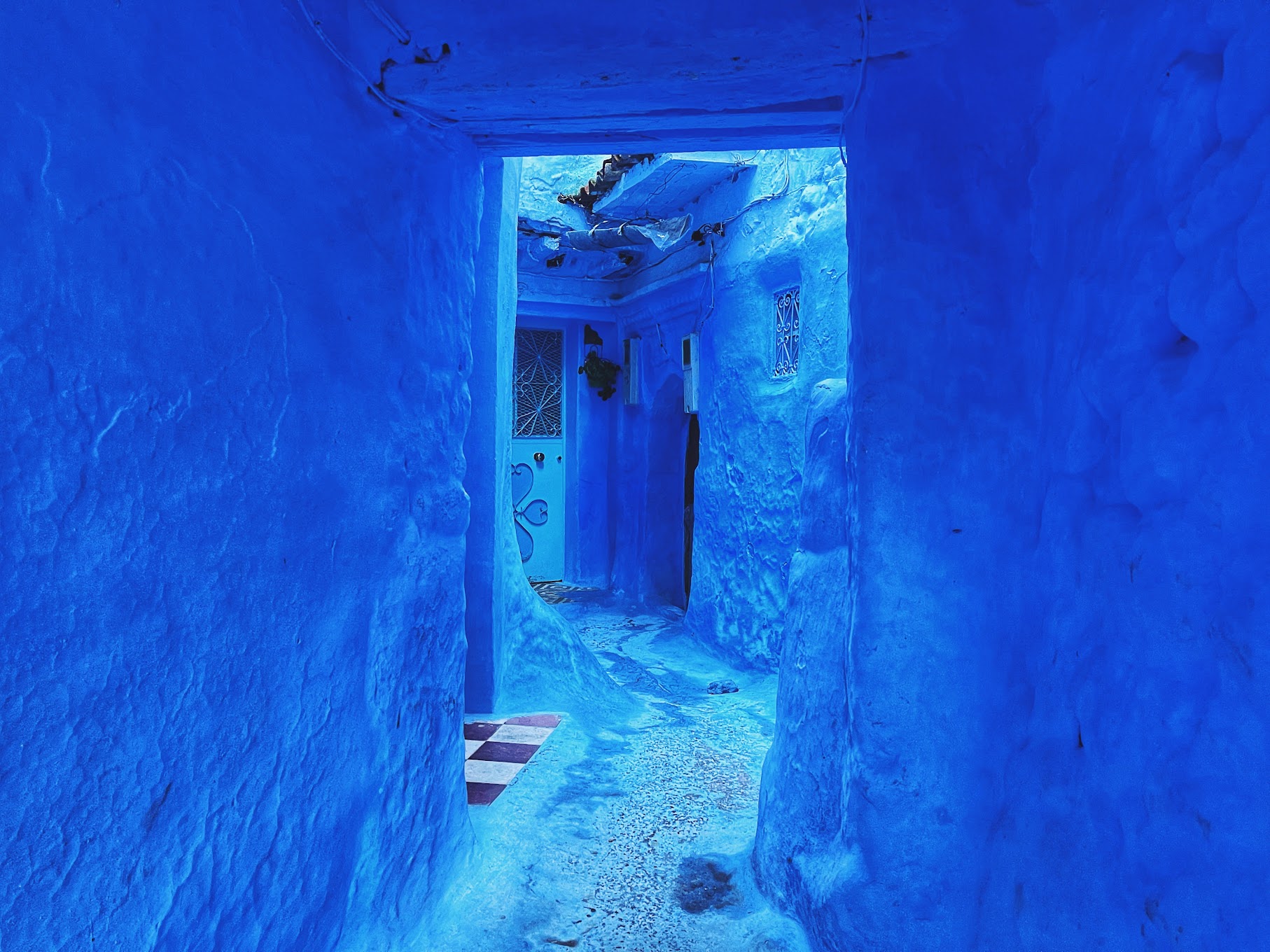 But, oh, how blue the town is! Various theories have been proposed to explain why locals paint their houses, walls, and streets blue — to repel mosquitoes, to promote calmness, a Jewish tradition to represent the sky, and so on. It’s possible that the real reason is something else. But whatever the case, the result is an ethereal vibe in all the azure surrounding you.

No wonder this town has become a favorite of photographers and social media influencers alike: it’s hard not to come up with a good picture here even if you spend just a few hours. 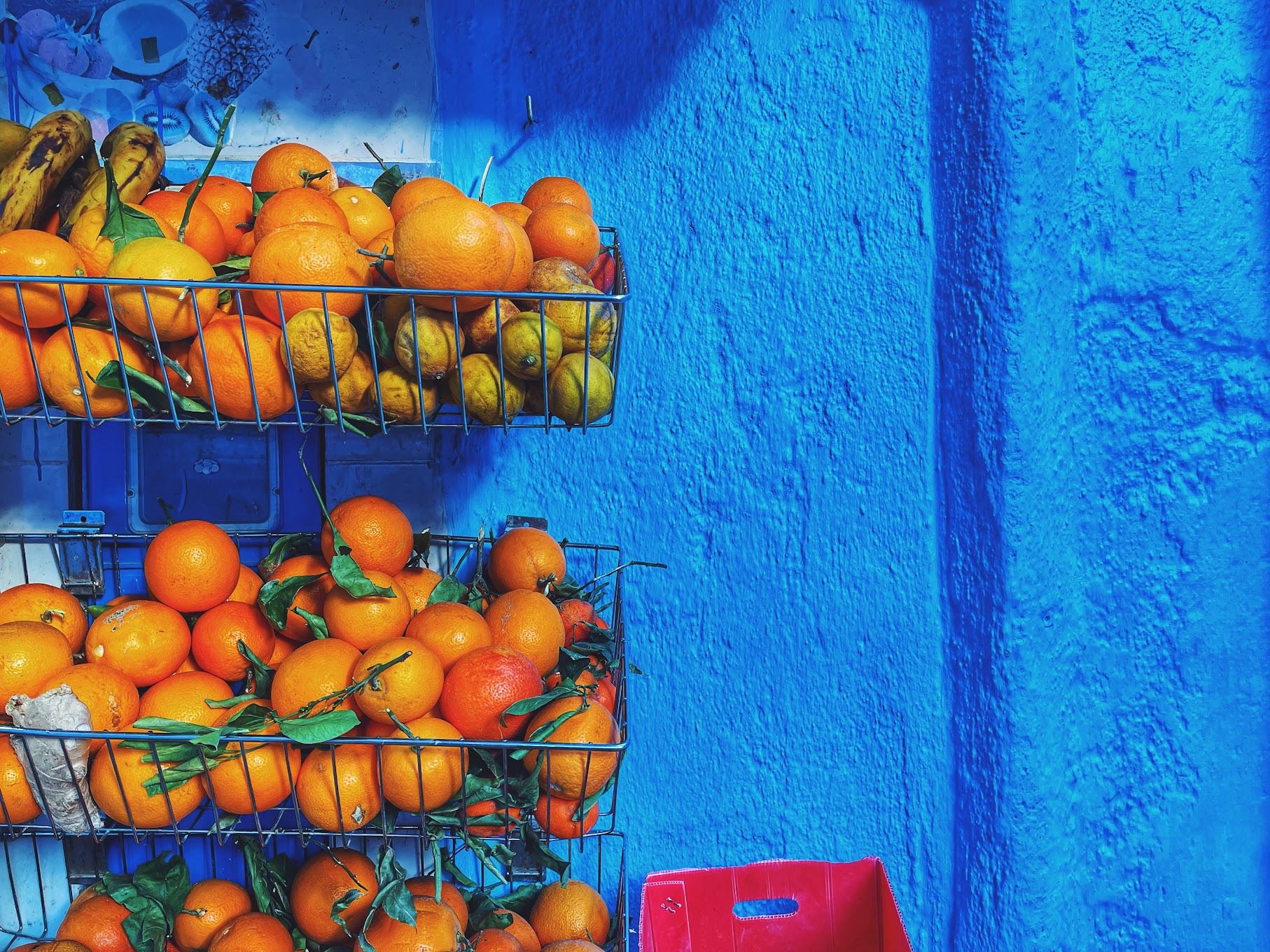 It’s not all about blue, though. Dominating the square near the medina entrance is the kasbah (fortress), whose brown color provides a counterpoint to the blue houses. The kasbah was built in Andalusian style, and inside are the emir’s residence, the emir’s personal mosque, a prison, and a garden, among others.

At the eastern end of the medina is a pathway that leads to the Spanish mosque on top of a hill. The mosque was created by the Spaniards in the 1920s, but it was never used. Today, it mainly serves as a point of interest and a lookout point to see the town charmingly nestled at the slope of the Rif. Trekking to the mosque takes about 30 minutes with a gently ascending slope. 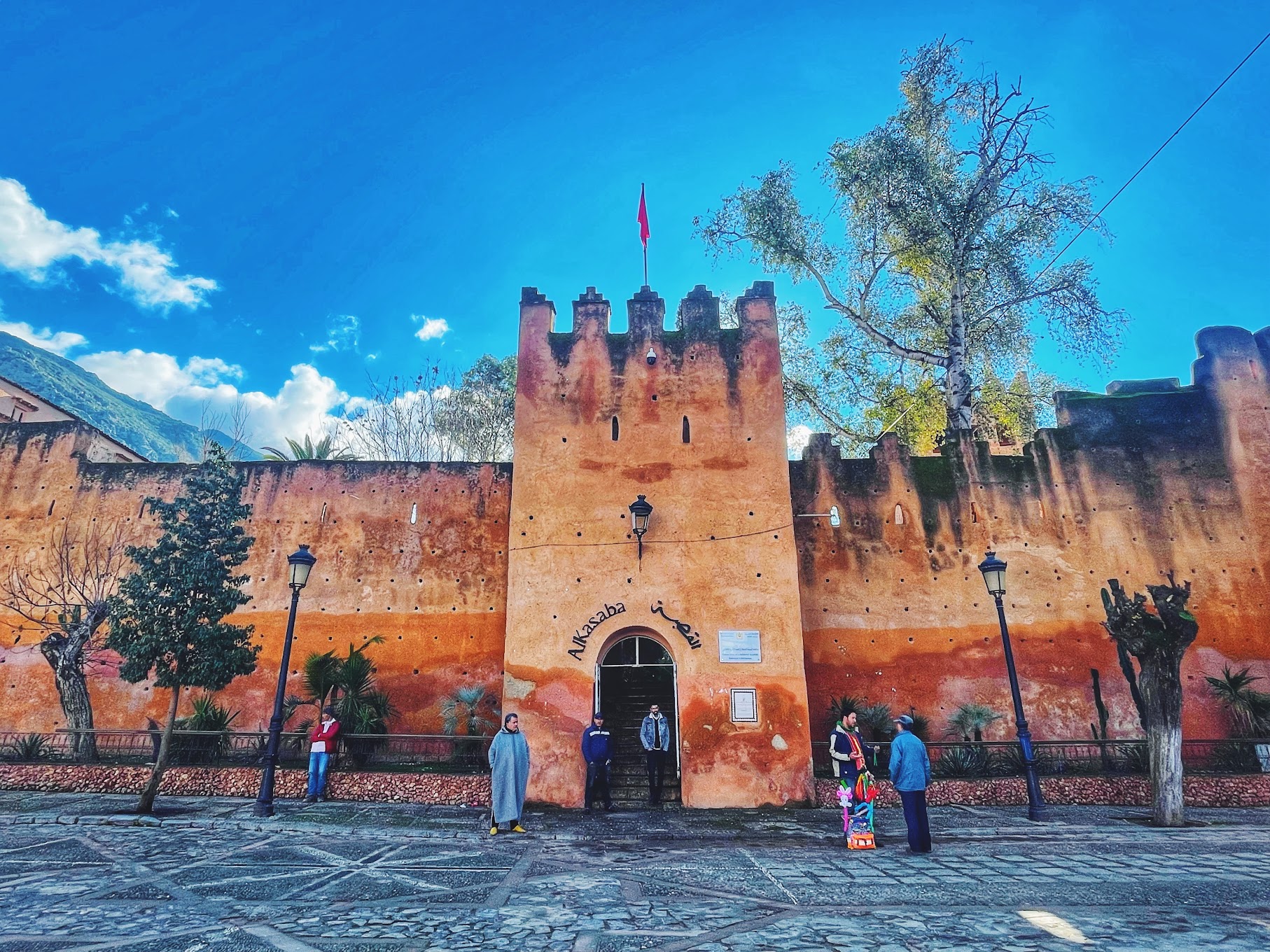 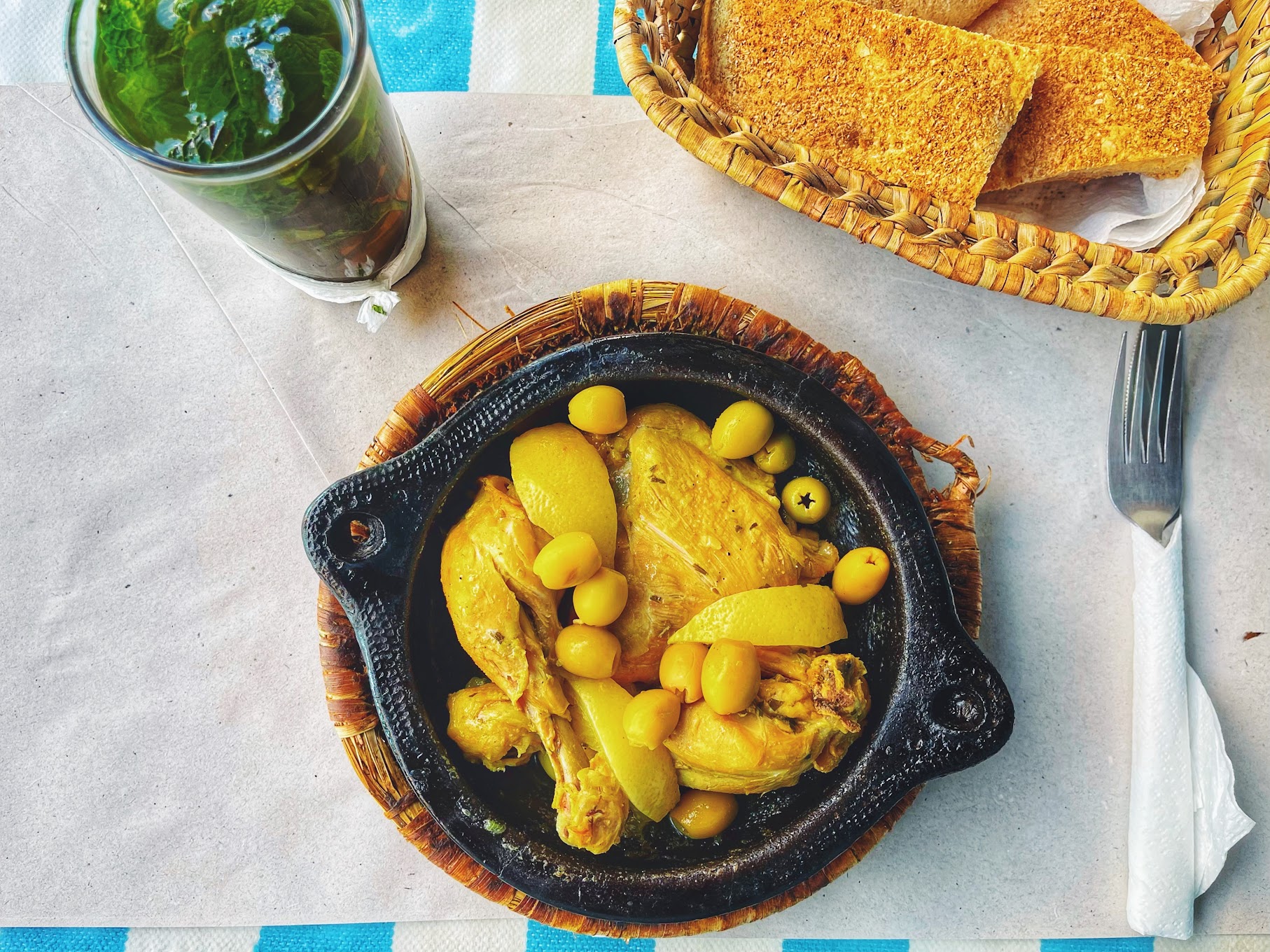 Back at the town square, I browse the shops a bit for fridge magnets. Then I go to Sofia, the only female-owned restaurant in town. Of course, I can’t be in Morocco and not have tajine, so I have chicken tajine with lemon and olives, all washed down with mint tea.

As I eat, I can’t help but think, how I love this town. Not only because blue is my favorite color, but also because the calming and friendly vibe of this place do really take hold on you.