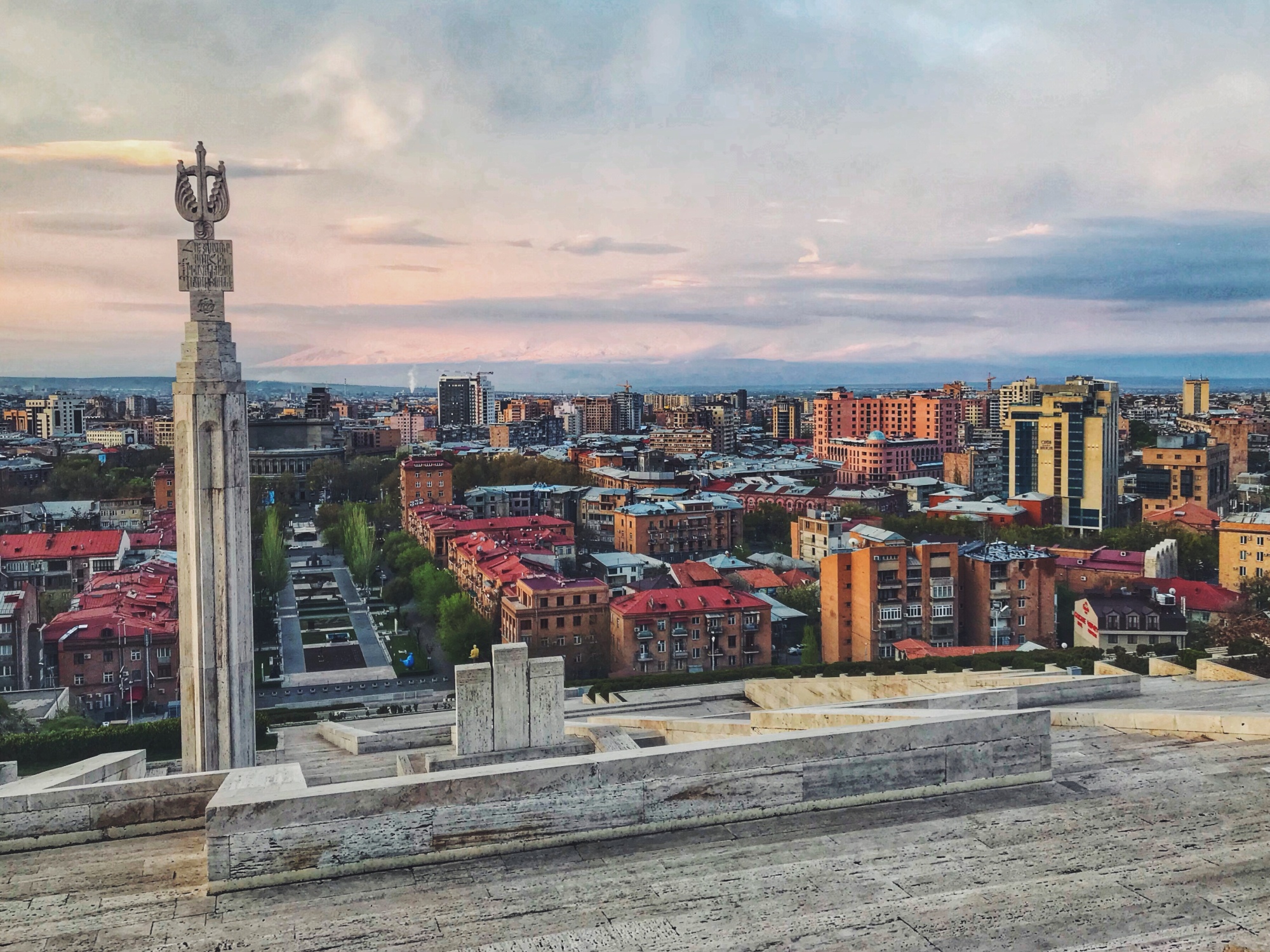 With our abbreviated time in Armenia and the loaded daily itineraries — not to mention the rain the last few days — there’s not much time left for a proper tour of Yerevan. So on our last morning in the country, I wake up really early just before sunrise and take a stroll in the capital’s central area.

Yerevan is actually one of the world’s oldest cities, having been founded earlier than Rome, though vestiges of its ancient history have been replaced with Soviet-style buildings. The city underwent a major reconstruction during the Cold War period, with the building boom transforming what was once a provincial town into Armenia’s largest and most populous city.

Naturally, I start my walking tour in the Cafesjian Museum of Art, about a 30-minute walk from our hotel. The museum is located within the Cascade complex, which is perhaps the most famous of Armenia’s landmarks. The complex’s imposing flights of stairs dominate the northern end of the beautifully manicured Alexander Tamanyan Park. Construction of the Cascade started in 1971 and was partially finished in 1980 due to lack of funds. It was then resumed in 2002, when the Cafesjian Museum Foundation, the brainchild of Gerard L. Cafesjian, began building the museum itself. The Cascade and the museum were finally opened to the public in 2009.

The park leading to the stairs have several sculptures, including one of a plump woman in a prone position and laughing heartily. Climbing the stairs of the Cascade, I encounter fountains and walls with Art Deco designs. I reach the top after a few minutes, gasping for air, probably due to lack of sleep and overestimation of my fitness level.

Nevertheless, the views at the top are superb. I get a panoramic view of Yerevan, with the clusters of building extending to the horizon where Mt. Ararat looms behind thick clouds. But the pinkish hue of the sky blends well with the warm colors of the buildings.

Having my fill of Yerevan’s skyline at sunrise, I go down the Cascade and explore more of the Kentron neighborhood. I walk south, reaching the Freedom Square. The area is filled with wide green spaces and coffee shops, though the one sight that commands attention above all else is the Opera Theater. A product of the Soviet times, the theater was opened in 1933, with a ballet troupe established soon after in 1935. The first ballet to be performed was Swan Lake.

That bit of detail probably wasn’t lost on city planners, who named the nearby artificial pond “Swan Lake” in honor of Tchaikovsky’s tale. Yerevan is also proud of its artists, both homegrown and abroad, typified by statues bearing their likeness dotting the park.

Yerevan takes on a more modern look heading further south in the Northern Avenue, ironically named respective to the direction I’m heading. The pedestrianized path is lined with boutique shops, cafes, and restaurants reminiscent of many other streets in New York. The area is the city’s shopping district, and it’s where the young go to see and be seen. Around the avenue are a number of leafy streets with bars, restaurants, and more shops.

Northern Avenue also serves as a convenient link between the Freedom Square and the Republic Square, which is another reminder of the Soviet era.

The Republic Square is the city’s main square and was designed by Alexander Tamanyan as the anchor to his “perfect city.” The square is surrounded by the Government House, the History Museum and the National Gallery, a local Marriott Hotel, and the ministries of Foreign Affairs and Transport and Communications. All buildings feature neoclassical designs and Armenian motifs, a throwback to the city’s Soviet years.

The square was actually called Lenin Square, but after Armenian independence, it was renamed just as with many other squares in the former Soviet states. Its architectural significance remains to this day, though, serving as one of the finest examples of Soviet-era architecture.

I make my way back to the hotel, passing another leafy avenue lined with decaying buildings as Yerevan slowly comes to life for the day. It’s a weekday, but it’s not as hectic as many other cities. Only a couple of cars are zooming through the highways.

I pass by the KFC restaurant where we ate the night before. It’s one reminder that Yerevan is well on its way to the future without losing its sight of the past.